“Who here thinks they do better under pressure?”

When I ask this question to the Navy SEAL candidates I mentor, most of them raise their hand.

And most of us would probably agree. But guess what, the idea that we can be “clutch,” though widely celebrated, is a total myth. As Drs JP Pawliw-Fry and Hendrie Weisinger explain in their book, Performing under Pressure: The Science of Doing Your Best When It Matters Most, noone — no, not even Michael Jordan — performs better under pressure. Sure, you may feel like you’re doing better because the adrenaline helps you focus, but you’re never doing better than your absolute best. (There’s plenty of research to back this up: one study of the NBA, for example, showed that although the season average for free throws was 76%, when the team was under pressure — down by one point — the average dropped to 69%.)

This was actually very encouraging and validated my own experience, just like when I heard that a great violinist (I can’t remember who!) said he lost about 20% in performance. Until then, I had found it disconcerting that no matter how much I practiced, I was always affected to some degree by pressure in a piano performance, presentation or tennis match; likewise I noticed that SEAL candidates had an expectation that they should be able to “rise to the occasion.” If that’s what we think then we’re going to feel shame and embarrassment when we don’t perform as well as we think we should have, which creates a negative expectation, making the next time we’re under pressure even more difficult. 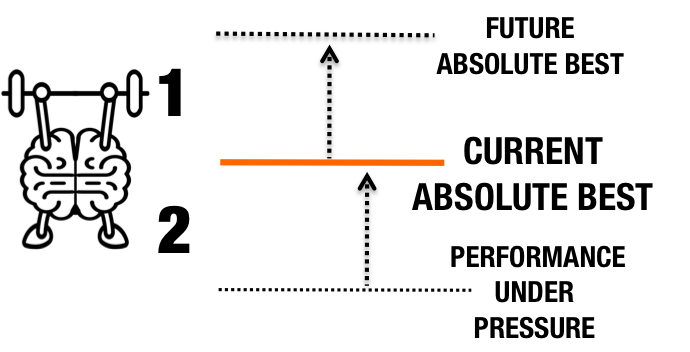 Let’s focus on the second way. What’s your body’s response to pressure? Your heart beats more rapidly, maybe your mouth gets dry, your palms sweaty — this is the arousal state. To narrow the gap, we need to increase the pressure and arousal in practice and decrease it in a performance situation.

This is how Mike Mussina, a major-league pitcher with 250+ wins does it. When he was a kid, he would pitch to a strike zone that his dad had painted on the barn and imagine he was pitching in the major leagues. Now as a professional baseball player, when he actually is pitching in those high-stakes situations, he reduces the pressure by imagining himself back on the farm pitching to the strike zone on the barn. In this way, he’s able to calibrate and control his response, regardless of the actual circumstances.

You can do the same thing at work. Imagine the stakes are high as you respond to pushback to your suggestion in the weekly meeting or want to influence a colleague’s opinion. Conversely, if you’re feeling anxious, simulate a more low-key situation. When one of my clients was preparing for a big pitch presentation, I suggested he talk about his company as if he were at a bar with a friend — immediately his delivery improved and became more natural.

Want more insights into performing under pressure? Click here to listen to my Mental Toughness for Mavericks podcast interview with Dr JP Pawliw-Fry.